The Romancers played a number of gigs at the Rainbow Gardens. For Eddie Davis seeing Max and The Romancers perform was nothing short of a musical revelation.  They confirmed what he had suspected about Chicanos and rock ‘n’ roll.  “When Max and his guys came to the Rainbow Gardens, then I heard my sound,” Davis said.... The Romancers were playing rock ‘n’ roll the only way they knew how.  Without attempting to develop a sound, Max Uballez  developed a sound, at least in the opinion of an “outsider” named Eddie Davis.  After hearing the Romancers, Davis spent the rest of his career, indeed the rest of his life, trying to recreate his definition of Chicano rock ‘n’ roll and Chicano R&B in the studio. 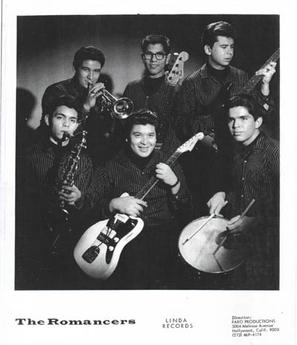 The Romancers had a fine body of work. They have been labeled a garage band by most music collectors and therefore their records are highly collectible and of great value.  The Romancers were the first East L.A. band to record an album and were a huge influence on the Eastside Sound from the early to mid 1960's. They were also the first East L.A. band to work with the team of Billy Cardenas & Eddie Davis.

With this group of musicians Max recorded.  ‘You’d Better” , "Rock Little Darlin’’, “I Found a New Love” with Robert and Rey and "I'm Leaving It All up to You" with the Heart Breakers.

“Rock Little Darlin” was recorded in Cucamonga at Frank Zappa’s and Paul Buffs studio.  Max returned to Cucamonga  to record “Cradle Rock” and “Everytime I See You” with the Heart Breakers.  For this session Max used Frank Zappa on lead guitar.  Max would change the Romancers band lineup depending on the project he was working on and who was available.  In essence whoever played with Max was a Romancer.  Frank Zappa was a Romancer for a day.

The main figure in the Romancers' story is Max Uballez, the leader, chief songwriter, and rhythm guitarist.  Max was involved in the production and/or wrote songs for many recordings by The Romancers, as well as other top Eastside bands.

Max Uballez was the Brian Wilson of ‘60s East L.A.-a multitalented singer-songwriter-guitarist arranger, whose band The Romancers evolved from a popular live act into a crack studio team behind most anything Chicano rock maven Eddie Davis released on the Faro, Linda, and Rampart labels.  Along the way, the latter day Romancers released a brace of their own singles that included gems like “She Took My Oldsmobile” and that crazed track "Love's The Thing"

The Encyclopedia of Latino Popular Culture

The Romancers Recorded two instrumental albums for Del-Fi Recordsin1963, Do the Slauson and Let’s Do the Swim.

On these records, The Romancers created the blueprint for what was later to be known as the “Eastside Sound.” --The Stand out song on “Do the Slauson” album was “The Slauson Shuffle,” written by the bands leader and rhythm guitarist Max Uballez.

The Romancers went on to record many singles. Their classic rendition of “My heart Cries” arranged by Max Uballez, featured sophisticated and well-executed vocal harmonies.

Question:
Talk a little bit about Max Uballez.  He seems to play an important part on your records.  You named a record label after his wife, Linda.
Answer:
Max Uballez was an extremely talented musician.  He was the leader of the Romancers, Billy Cardenas’ first group.  He was just great.  I made a lot of mistakes with Max.  He wrote songs like crazy.  He had a song for everybody and everything.  He could coordinate for me because I’m not a good musical producer in the sense of bringing the musicians together.  He knew how to get things out of them because you couldn’t tell these people how to play an “F” or a “C”.  They wouldn’t know what you were talking about.  They were mostly self-taught musicians...
...Eddie Davis, Rampart Records
October 1992, from The East Side Sound liner notes
Dionysus Records BA08-2